[Jiu Jiu’s note: Part 2 can be found here. I also regularly respond to most all the comments, so it’s never too late to add your 2 cents to this article! ^_^]

I love feeling feminine. One of the drawbacks to doing BJJ is that, afterward, I often feel like I was tagging along with Steve Irwin and got dragged into the swamp by a croc and barely escaped with my life. Oh wait–that’s how I LOOK. I FEEL exhausted. 🙂 And during the summer when it’s no gi and I’m nearly swimming in someone else’s pool of sweat–I LOOK like I lost that match with the gator, and I FEEL like it, too. 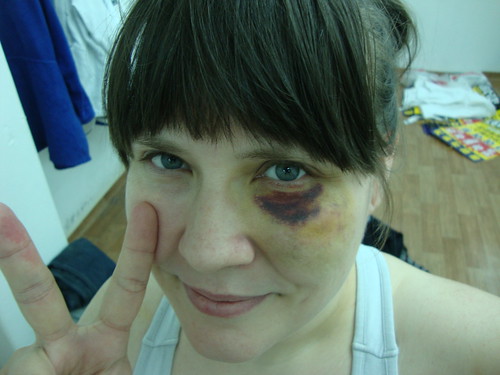 This is the part of my article I like to call “I scour the Internet so YOU don’t have to (unless your name is Slideyfoot).”

On Jiu Jitsu Forums there was a post about the good and bad points of beautiful women in BJJ, namely the idiot boys who say things like “I’d like to get in her triangle,” and that women arealready struggling to gain respect and pictures of women in sports bras and black belts make that more difficult.

Graciemag hosted an interview with Michelle Nicolini, a black belt, which was more about what it’s like to be a woman in BJJ. However, it did yield this awesome quote by her:

Train, even if you’re wearing perfume, makeup, nails and a pink kimono, just train. There’s a very feminine and charming side to the world of Jiu Jitsu.

I very much enjoyed Megan’s article called New Lungs, a New Gi, and BJJ’s Femininity. In it she talks about how she enjoys that DURING the class she doesn’t NEED to focus on her looks–she feels just as sweaty and gross as the dudes, but AFTER class she wants to femme it up. She also brings up a great point–the difference between FEMININITY and SEXUALITY. (More on that later) 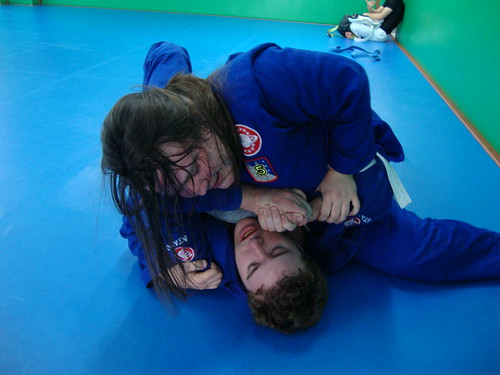 Sweaty hair in your partner’s mouth is NOT feminine.

Megan referenced a great article called Ladies First! The BJJ Renaissance and the Growth of Women’s Jiu-Jitsu in Texas. In it, it talks about the situation in Texas and included so many quotes by women in BJJ–why they love it, what it means for them, etc. Georgette Oden was quoted as saying Guys already usually think it’s cool, but women might not, until they see that other women are getting involved and enjoying it yet retaining their femininity.

I loved Meg’s Design Your Own Crazy-Ass BJJ Gi entry. It’s all about being feminine and yet functional. It is a “Death Star of girlie self-expression.”

There was a forum post over on Sherdog about why women don’t like BJJ, and one of the key points made, in my opinion, was that BJJ was NOT feminine and that women who did it were an exception to the rule.

Me sporting swamp hair. The croc lost this time.

Supporting this idea was an article I absolutely LOVED by Megan O called Hold My Medals while I Triangle Your Boyfriend. This article talks quite at length about how BJJ is one of the least feminine things this gal has done Within this amazing article she brings up a key point, one I will wax poetic about later: One of my fellow training partners has said on numerous occasions that she doesn’t want to be thought of differently or treated differently because she is a woman. 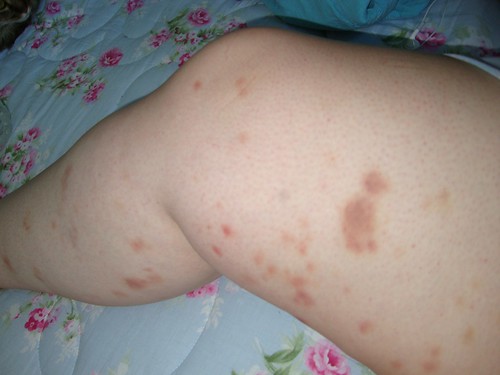 And finally, I would be remiss if I did not include The Feminine Mystique of Exercise and Sport by Katie, aka A Skirt on the Mat (okay SERIOUSLY get out of my brain, Katie, because you wrote this less than two weeks ago and I didn’t read it before I posted here. Looks like we have some synergy going. Or I’m just psychic-ly linking to you. Or we’re both just women in BJJ and femininity is a concern for us. I choose the psychic link theory, myself) and in it she said:

when it comes to the more intense, full contact sports, some women either downplay their femininity, or underline and highlight it with bold colors, but both are essentially attempting to convey the same message, “being a woman does not hinder my ability on the mat or in the ring,”

So there it is. To sum up the whole Internet: men and women are different. Women in BJJ do not want to be SEXUALIZED. Sexualization and femininity are NOT the same thing. Many women want to be feminine. BJJ is not feminine. Women who do BJJ either do not care about it or they do care about it. Let me sum up:

I’m in the pink! And yes, I’m exaggerating. We are not this polarized.

The glaring things I’m missing from most of these articles is: WHAT DO BJJ WOMEN WHO CARE ABOUT FEMININITY DO TO FEEL FEMININE? I am not at all talking about feeling like a woman. I have bewbs and and a va-jay-jay. I feel like a woman all the time, both emotionally and to my sparring partners who have been stuck in my vice-like half-guard :).

Analyzing the specific points that feel un-feminine: the gross feelings, the ultra short fingernails, the potential for mat burn and cauli ear, the sweat, the swampy hair. We don’t LOOK awesome. So how can we LOOK/FEEL MORE feminine?

CLOTHES
Wearing feminine colors–many women’s gis are in colors designed to appeal to women (ps. no, I don’t think Pepto Bismol is appealing to ANYONE). There are also fantastic rash guards out there that are distinctly feminine, including a pink one for breast cancer, some pretty surfer rash guards, ones with a feminine logo, and even Fight Chix’s rash guard. There are also some wicked cool patches out there, like Georgette’s “Female of the Species” patch, and even some Hello Kitty patches.

Georgette rockin the chica gis. Notice pink can be pretty and not look like it is the cure (or cause) of stomach aches!

SMELLS
Dear ladies and gentlemen, I do NOT mean to dump on perfume before you get on the mats. I mean smell nice. Take showers, wash your gi, wash your rash guards. When I smell like peaches and apples or roses, I FEEL more feminine. I also got some Peppermint Cooling Leg Gel from the Body Shop. Having peppermint smelling feet is not only kind for partners, but makes me feel like I’m having a spa day :).

TATTOOS!
Permanent makeup! Yes, I’m seriously considering getting permanent eyeliner while I’m in Korea. It’s common here, and I’ve been wearing the exact same eyeliner style for over 15 years. I’ll feel super feminine if I get this done, plus, it will save me time every day because I won’t have to wear eyeliner! 🙂 I’ve also had eyelash extensions recommended to me.

I call this my “On the mat” look

I would totally pick gold. This guy even has cool pictures on some of them!

TOENAILS!
I only recently discovered the miracles of pedicures! Holy crap! Way to feel feminine!

SHAVE!*(edited to add)
When I have smooth legs, I feel much more feminine. I like to keep at least the lower half of my legs smooth. So really–I only NEED to shave up to my calf. 😀

Haircuts (added 7/17/2011)
I got my haircut so that it wasn’t this tangled, sweaty, gross mess. Now it is TOTALLY CUTE and looks like this: 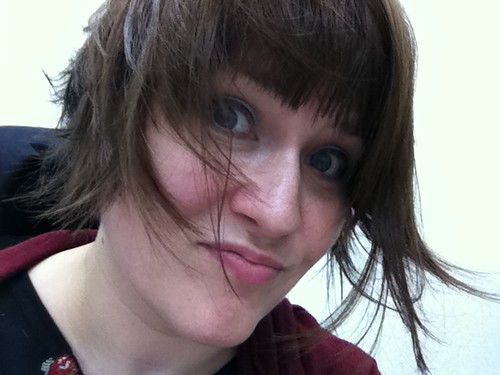 NO-NOs
I would LIKE to believe that these are common sense, but there is no such thing as common sense for people with no experience or background in BJJ, so let’s make it clear.
1. No makeup. Your face is smushed up against your partner’s gi. No one wants your eyeliner or foundation on their gi.
2. No hair products. Again, no one wants your gel or hair spray up in their face or rubbing on their gi.
3. No jewelry. I really didn’t know this going into BJJ. I kept my earrings in for a week (they were the captive ball hoops). These can get grabbed or stuck to gis and you DON’T want them ripped out.
4. No long fingernails. Period. These break, cut, and maim both you and your partner.
5. No perfume. It’s obnoxious and you don’t want guys to go home smelling like they just had an affair. Or maybe you do, you vixen!
6. No wearing JUST a sports bra. We don’t want your bewbs and your sports bra to have a falling out. We don’t want to be focusing on your cleavage. Please wear something over your rack.
7. No going commando. Really. Just don’t.
8. No shaving RIGHT before class* (edited to add). THIS IS FOR MEN AND WOMEN. If you shave RIGHT before class you are opening up microcuts on your skin, leaving it perfectly hospitable to bacteria and staph. Shave, just at least a few hours before class.
9. No loose, long hair in class. Again, for MEN AND WOMEN. If you have medium hair or longer, it should be in a pony tail or put back somehow.

So the question remains: Gals, where do you fall on that VENN diagram (blue, pink or red)? I personally like being a feminine woman and I like doing BJJ–for me, it’s important  to combine the two. GALS–WHAT, if anything, DO YOU DO TO FEEL MORE FEMININE? GUYS–WHAT, if anything, DO THE BJJ WOMEN AROUND YOU DO TO LOOK MORE FEMININE? If you avoid going for the feminine look on the mats, why? Do you feel like you’ll be more sexualized if you look feminine? Do you feel you won’t be taken as seriously? These ARE concerns.

To the random negative Internetters who may be reading–fashion < BJJ. I don’t feel like it’s more important to look good than to be good in BJJ. I go to BJJ because I’m serious about my BJJ and want to be better. At the same time, I enjoy feeling feminine and don’t think the two need to be separated.

Lady BusinessAdvice, Because knowing is half the battle, Lists