The first stop on my West Coast tour was to the University of Jiu Jitsu. This was the one school I was most excited to visit. I landed at 3:45pm on a Friday and immediately went to a 6pm class. Did I mention I was excited?

*NOTE: Quotes on this page are taken directly off the University of Jiu Jitsu website.

First Impressions
The size of the facility was slightly overwhelming when I walked in. Thankfully I was greeted as soon as I walked in, and people were so friendly. There were two sizeable mats in aqua and orange arranged in a visually pleasing/organized way, a sales area, a front desk, and office/changing areas. The gyms I’m used to have one big mat and not much else. This had a clear place for visitors to sit, enough training room for a large number of students, or even two classes running simultaneously, a separate changing room for women, and for visitors, that front counter is a clear place that you need to go when you walk in. I didn’t see their showers, so I can’t speak on them, but if the rest of the academy is any indication I expect they would be well maintained and clean. 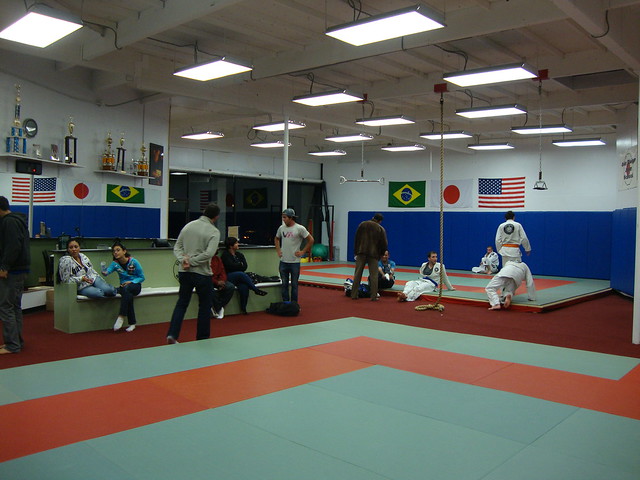 The academy. T-shirts on sale to the right, offices and changing rooms to the right. Visually pleasing mats!

The Class
I attended the Friday night 6-7:30pm “Technical Class.” The class description and the class schedule show some discrepancies in the schedule, but it looks like this class is offered MW 9-10:30am, TTh 12-1:30pm, and  TThF 6-7:30pm.

The website describes the class as: “Our core fundamental class at the University of Jiu Jitsu.  This class is where the technique of the day is taught.  This class includes time to practice and drill the technique, and time for sparring.  During this class,  new white belts will learn essentials with a private instructor on their own separate mat.  We believe this give beginners a head start with their fundamental understanding of Jiu Jitsu.” It lived up to that description.

The Instructor
I was taught by Saulo Ribeiro himself! I was a bit star struck–his book,  Jiu Jitsu University, is the only BJJ book I own, and I was watching a jiu jitsu video by him on the plane. Saulo is a fourth degree black belt from Brazil who has been doing BJJ since 1989. He is personable, passionate, and knowledgeable–a great combination in ANY teacher. Also, he made sure to have everyone say hello to me and the other two visitors during the initial lineup. I felt welcome right away. 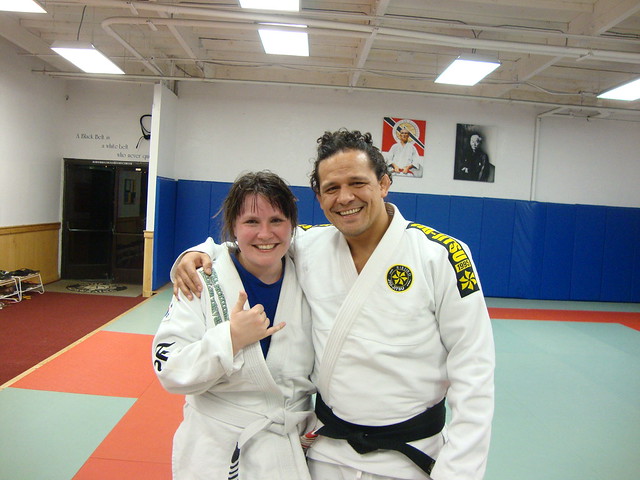 In case you couldn't tell, this is my OMG I'M STANDING NEXT TO SAULO face.

The Warmups
These were so much fun! There were around 26 students in the class. Here were three of the more fun ones: We ran in circles, then Saulo would yell out numbers and we’d quickly have to get into groups of that number. The “losers” would have to climb a rope. After that we had to ride piggyback on our partners. One person had a loud whacking-stick that doesn’t hurt so much as make loads of noise. They would chase everyone else and if you were the slowpoke pair you’d get whacked on the back. It was hilarious and fun. After that, Saulo held the stick and people would jump over it and do a tuck roll. I can honestly say I’d never ever done anything like that and I was a bit nervous, but with everyone cheering me on and smiling and clapping even I was able to do it. Amazing!

Photo courtesy of University of Jiu Jitsu's Facebook page. Saulo and his STICK!!!

The Lesson
This impressed me the most. The class I visited was a review. Throughout the week they had been learning four different escapes from half guard. Saulo had everyone get in a circle, then rather than simply review, he sat back and classed a student forth. This person had to teach the technique to everyone. Not just show it, but teach it, which meant this student had to explain the position in detail, talk loud enough for everyone to hear, and run through the technique. When he was finished, Saulo asked everyone else: Is that right? And if they said NO, the student demonstrating would try to figure out which step was missing, or the other students would explain.  Then Saulo would say if it was correct or not.

This was such amazing methodology. By doing this, Saulo has put the knowledge directly in his students’ hands. He’s made them individually responsible for it, from his black belt students all the way down to his white belt students. By doing this he creates autonomous students who are able to help one another, and he puts a responsibility for that knowledge in the hands of even a first day white belt. I asked him about this afterward and he said it was why it was called the University of Jiu Jitsu.

As a teacher trainer, I was very impressed with the methodology. This class was very student centered, and it gave him a direct method for assessing not only what his students know or don’t know, but also his own teaching. He can see what was effective and not effective. He can see directly what people can and can’t remember. What a fabulous way to see how you did as a teacher!

The Sparring
We started with positional sparring so that we could get a feel for the half guard against a resisting opponent. Then afterward we went into free-sparring.

The sparring was well organized. We were split into two groups and we were in two lines facing one another. After one round of sparring, one of the lines stayed and one moved. This made for a smooth transition from one partner to the next, and none of the ugly-kid-at-the-school-dance feelings you can get when you have to pick partners. 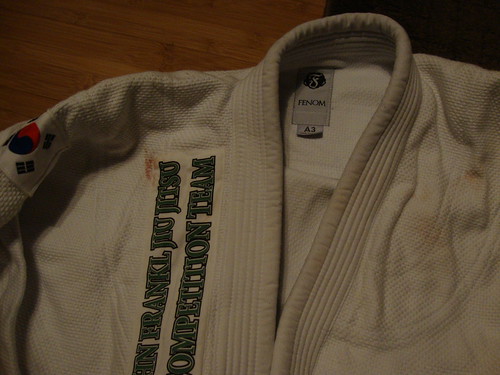 They christened my gi! I'd never had blood on my gi before. 🙂

The Students
There was a wide range of belts and everyone was so friendly and kind. I don’t think people came out of their way to meet me, but those around me made sure to introduce themselves and they asked me questions about me and my training. I met my first brown belt woman! She was only one other woman in this class. She was a fantastic partner and helped me immensely. She helped orient me and introduce me to people and helped integrate me in the class. I had the opportunity to spar with some teenage boys who were belts I’d never seen before–green, orange, etc. They made me feel safe and comfortable. Overall the training partners were in control, knowledgeable, and fun. 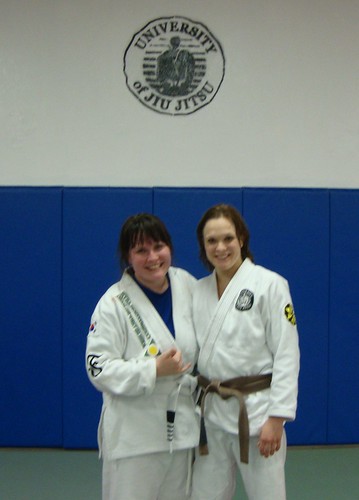 My training partner, Kiri. The first female BJJ brown belt I'd ever met!

My Douche-bag Move
I want to choke myself out for this. I didn’t even realize I was doing it. I had an elbow injury and so I was a bit nervous about anyone grabbing my arm for an armbar. So anytime someone did, I tapped. Except that instead of saying “Tap” I said “Okay–I’m giving it to you.” (cue facepalm). WHY DIDN’T I JUST SAY TAP???? It’s not like I had a choice when they grabbed my arm–it’s not like I was DECIDING to give it to them. Sigh. Dear my training partners, I can only blame this on my long flight and little restful sleep. I’m not as big of a douche in Korea. Sigh.

Overall
This school was FUN. Learning here was enjoyable and technical. I had such a great time here. I highly recommend this school, both for the atmosphere and the level of teaching, and the feeling of team spirit. What a great school. I sincerely can’t say enough good things about it. Plus, they sell so much great swag, that it’s easy for Saulo’s students to feel like they’re part of a team. You can buy rash guards, t-shirts, etc. The branding is so simple and sweet. I bought the I <3 Jiu Jitsu t-shirt below that uses Saulo’s symbol in place of the <3 symbol.

They have some cool stuff for sale on their website, too, <s>like BELT RANK SANDALS! So sweet. I may break down and buy a pair once I hit blue belt.</s> Editor’s note: they no longer offer belt rank sandals, but they do have a belt rank belt. 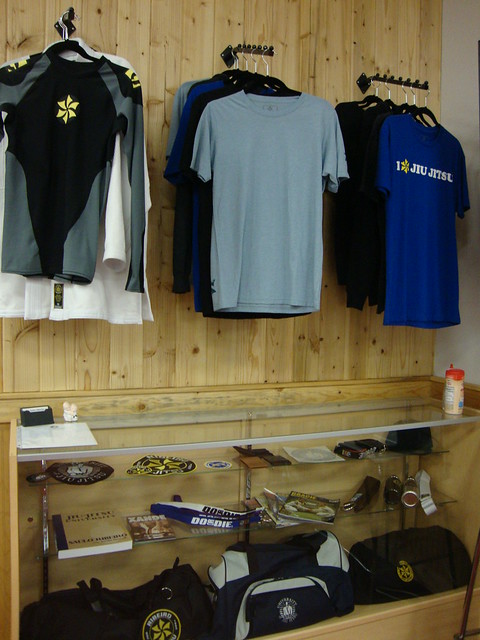 The School Philosophy
University of Jiu Jitsu describes itself as “a progressive learning environment that promotes traditional martial arts and their accompanying values, based on positive attitude, discipline, family, honor, loyalty, respect, and samurai spirit. The goal of the University is to not only build better martial artists, but also better human beings.” This philosophy permeated the entire school. I felt it from the moment I walked in until the moment I left. This is a philosophy that does not merely exist on paper but in the hearts of the instructors and the students.

Etc
I was greeted as soon as I came in the door. Mike Liera answered all my email questions when I wrote to info@unijj.com. He was quick to respond and helpful. There was a standard release to fill out. There were set water breaks and the only time I felt a bit disoriented was in the final line up. I believe they lined up 8 people per line, by belt. The mat fee was $30 per day, they only allow blue or white gis, and I was able to wear my school’s patches with no issue.

How to get there
University of Jiu Jitsu is located at 3350 Sports Area Boulevard in San Diego. I am geographically challenged and got disoriented along the way. Two U-turns later and I was there.

University of Jiu Jitsu is circled on here

If you stop by University of Jiu Jitsu or email them, please mention you read this article on my blog!

Today was the first day I have put on a gi in around 4 months. I split with my gym back in October, and between the holidays, foot dragging, and general avoidance, I just haven’t done any jiu jitsu. My friend and old teammate invited me to a women’s open mat hosted in Leesburg, VA. […]

Itaewon Jiu Jitsu was opened by DK, a John Frankl brown belt, in May 2013. I moved to this area at the beginning of the year and changed over from my old academy to this one. I have found that folks are very welcoming. Most folks are white belts here, but I’ve found that overall […]