The second stop in my West Coast Tour was at Fabio Santos’ Brazilian Jiu Jitsu Academy.

*NOTE: Quotes on this page are taken directly off Fabio’s website.

First Impressions
The people were terribly friendly! It could have been because I had a police escort and the cop told them to take care of me 🙂 But I think it was just because they were a friendly bunch. There were SO MANY PEOPLE there in about a medium sized space! I’m guessing about 20-30 people. Thankfully I was tag teaming with a fine, young gentleman who helped me throughout. 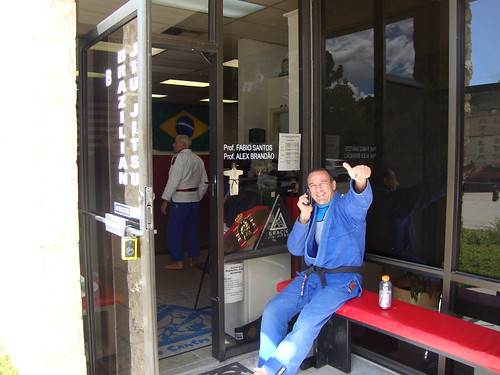 The Class
I attended the Saturday morning 10:30am to 12:30pm class. Their class schedule shows BJJ is offered 6 days per week. Mondays are open mat, Fridays are  lunchtime classes 3 days per week. Additionally they offer classes for kids 3 times per week, and 2 times per week for juveniles (I have no idea the difference). This is not bad, especially considering that, according to the website, Fabio teaches every class himself. And he did, indeed, teach the class I attended!

The website says “The spacious Academy offers a matted workout area and locker room in a clean friendly environment.” I would agree with this, however I did not find it overly spacious. Perhaps it is compared to other places, but it felt a tiny bit cramped. It could have, however, been due to the sheer numbers of people attending that day. 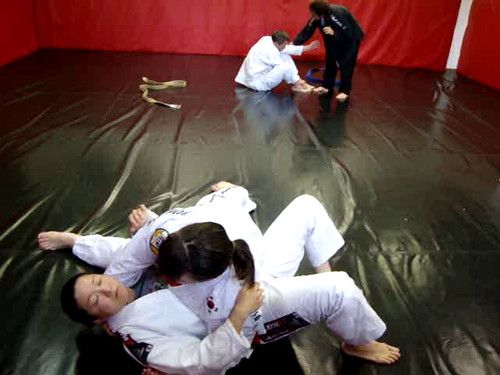 Here you can see the size of the place. I think we were around the middle of the place, maybe a little closer to the door behind us. This was after class.

The Instructor
It was my first time meeting a red and black belt. Fabio Santos came across as a caring, dedicated, serious teacher. Additionally, Alex Brandao, a 3rd degree black belt, was also helping with the class. Alex was outgoing, friendly, and charming. They made a great pair! I felt honored to be able to take a class there–especially with the amount of knowledge in that room. 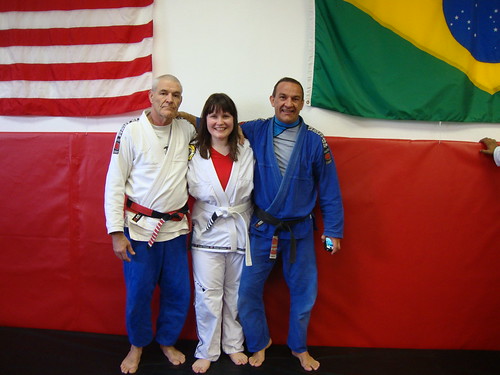 I asked Fabio for a story, and he told me a hilarious one. Years ago when they were at another location, they used to get people coming in all the time and issuing challenges. One guy came in and said “Do you guys do slap boxing?” Fabio had no idea what slap boxing is, which apparently was like boxing but with open hands, but said SURE! He picked a blue belt (or was it a purple belt! ack!) and partnered them up. The blue belt got in one HUGE SLAP and the challenger RAN INTO THE CORNER, turtled up and cried! hahahaha.

The Warmups
These were more like the types of warmups I was used to–splitting the class into two, and they lined up on opposite walls and did drills down the center of the class. What made it different, though, was that all the warmup drills required a partner, including some take down drills. I’d never done takedowns as warmups, so this was a little intimidating at first. Thankfully I had a partner who was going out of his way to take care of me.

The Lesson
This lesson was all about mount. We did mount escape after mount escape. Fabio stressed that some key points to mount were that you don’t want your partner too high up under your armpits. When they’re too far up you have to wiggle them down further so you can put your elbow in between the knee and your body. This was one of the first times I’d heard the tiny key details that make it work. Another was that holding is bad and straight arms is bad. We had a chance to practice several escapes from full mount. Even three months later I STILL use what was taught to me in this class. Thanks!

The Sparring
We started with sparring from mount so that we could practice against a fully resisting opponent. One of my partners was this spunky female blue belt named Marissa. I think she was around 18 or 20. She was TOUGH! Holy crap! I loved sparring with her.

The sparring was done in groups, as there were too many people to roll at one time. So half of us sat down while the others rolled. The weather was so nice that you could walk out if you needed a little air, or you could sit on the benches. 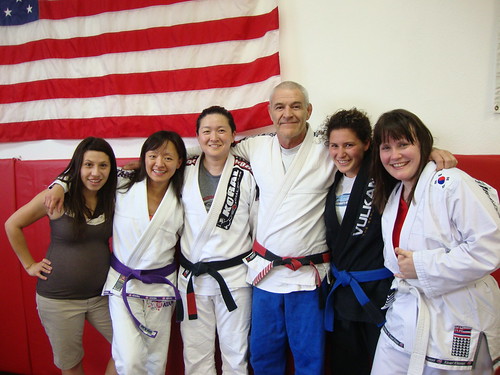 Ladies of Team Fabio! Not pictured: Dagney (sorry, Can!)

The Students
I was so shocked at the number of women. Sounds silly, perhaps, but it was so amazing to meet upper level women in jiu jitsu. I was so inspired. They all seemed to care for their instructors deeply–more than just a “Yeah, he’s a great teacher.” It seemed to me that Fabio had impacted all their lives.

Also, I got to meet Caleb from the Fightworks Podcast! I didn’t know it was him until after the class, but I was so excited once I realized it was him! 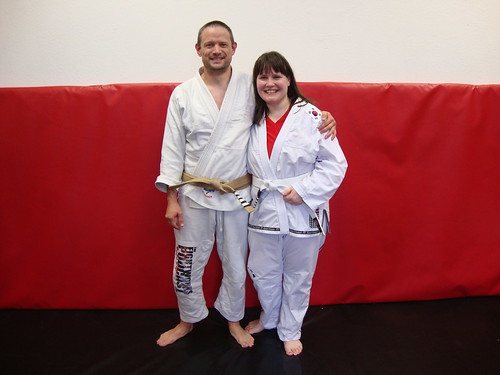 Jiu Jiu and Caleb! I just noticed the sweet patch he has on his leg! Do want!

One of the COOLEST things that happened to me there was that after the class, Jeanne asked me if I needed help on anything! Wow! A black belt seeking me out after class. Hello mind, consider yourself boggled. We even got to spar a bit. She was the first black belt I’d ever rolled with! I felt truly part of a sub-community–women in BJJ. It was a cool feeling. I asked her to show me a super simple finishing move from side. And now we have VIDEO for your viewing pleasure! It’s my first time recording a move for myself.

My Douche-bag Move
I was a bit late. Ack! I tried to get there early, but I got TERRIBLY lost and had to follow a cop to get there.

Overall
This school was welcoming and knowledgeable. I asked Fabio why someone would choose their school over any number of other schools in the area. “Knowledge” was his answer. “You’re getting it straight from the source.” He then asked me if I’d rather drink from the source or from downriver where the dogs have peed. Nope, can’t make up something like that. This would be a school I’d love to train at simply because of the number of upper belt students, AND the number of upper belt WOMEN students.

The School Philosophy
“Fabio Santos is dedicated to preserving, and passing on to his students, the quality and integrity of the Jiu-Jitsu he was taught by the Gracie Family in Brazil.” I definitely felt this throughout my visit. Fabio is a guy who I imagine flaky people would be punctual around. I have a hard time imagining someone giving him some lame excuse for why they hadn’t been to class. More of a John Wayne in True Grit kinda guy. Except imagine John Wayne in a gi…and he’s Brazilian…The passion Fabio shows is not the passion of youth, but something that has been tempered with time. Quite frankly, he IS jiu jitsu.

Etc
I had a contact at this school simply because of my connections in the blogosphere–Dagney! Because of that, I cannot tell you about the email responses from the staff. Their email address is info@fabiojiujitsu.com. I filled out a basic standard release form. There was a water fountain–old school style like we had in our middle school! There were 2-3 changing rooms with curtains and people tended to leave their belongings in there on the bench seats or floor. There were no showers. I’m not certain about the mat fee because I was there as Dag’s guest. I saw many colors of gis–black, white, blue, and Fabio was even wearing a mix–white on top, blue on bottom. The front desk was helpful–it was run by Shari Santos, and she could not have been more cheerful. They even have an active AND updated Facebook page!

How to get there

Fabios Santos’ BJJ Academy is located at 4616 Mission Gorge Place in San Diego. Their phone number is 619-229-0022. Continuing my trend of getting lost, I was so turned around that I had to have a police escort to their academy. Apparently there is a Mission Gorge Road and a Mission Gorge Place. I was at the wrong one. It’s painfully clear when you have a map in front of you, but when you’re jet lagged and driving up and down the same street five times it doesn’t FEEL that obvious!

I finally stopped at the X after literally driving up and down Mission Gorge Road five times. I called Dagney, who was at the arrow, bizarrely enough. She told me “I’ll drive you there” which was weird, since she was working. “Now don’t panic, but I’m a cop.” lol. Then she escorted me RIGHT AROUND THE CORNER. Sigh. Don’t make my mistake. If you do get lost, you’ll have to call the academy at 619-229-0022. They don’t usually provide police escorts. 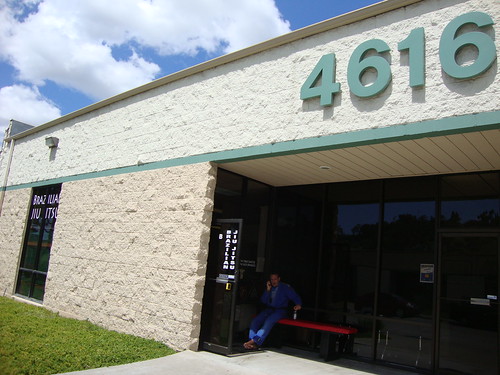 THIS is what the building looks like. If you can't see clear numbers and offices, you're on the wrong street!

If you stop by Fabio’s or email them, please mention you read this article on my blog!

Today was the first day I have put on a gi in around 4 months. I split with my gym back in October, and between the holidays, foot dragging, and general avoidance, I just haven’t done any jiu jitsu. My friend and old teammate invited me to a women’s open mat hosted in Leesburg, VA. […]

Itaewon Jiu Jitsu was opened by DK, a John Frankl brown belt, in May 2013. I moved to this area at the beginning of the year and changed over from my old academy to this one. I have found that folks are very welcoming. Most folks are white belts here, but I’ve found that overall […]