My holiday is working out!

As requested, here is me traveling in my Fenom BJJ gi 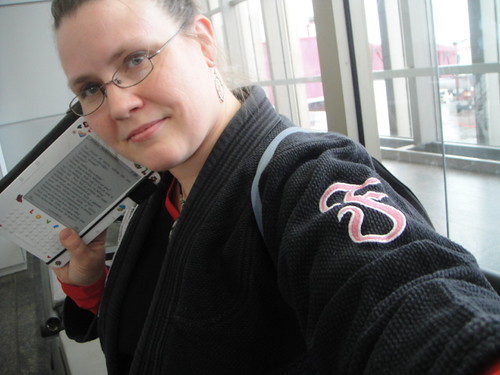 I was saving space in my luggage. I had a carry on at exactly 10 kilos, and a check-in weighing exactly 20 kilos. The check-in bag was entirely full of gifts, plus my gi pants and white belt. So of course Aeroflot lost it. Thankfully I got it back with nothing missing. BUT, before that happened I had a wonderous 22 hours to spend at the Moscow airport. A one day visa would have cost me $300, and an earlier flight would have been $400. So I came with snacks, laptop, Kindle, and iPod. I only spent $2.60 on a coke. GO ME! 🙂 Here is me at 4am, tired because I could only sleep for around 3 hours because I was so uncomfortable. I’m brushing my teeth and wearing a Fenom gi! 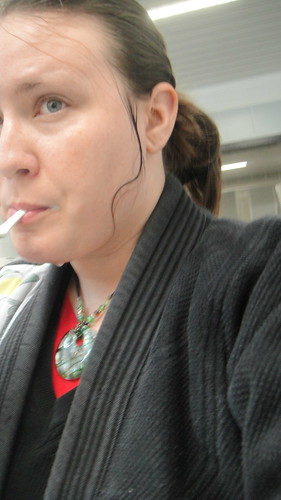 But it all worked out in the end and I made my way to Ukraine: 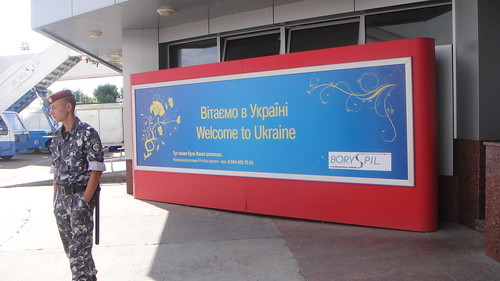 I met up with Anton Farb, a guy who teaches Krav Maga and does BJJ as a hobby. He’s a really amazing guy and I’m so thankful to have met him! For the most part it’s been just the two of us rolling, 9am almost every day. This week we had two more join us! Here they are at the gym: 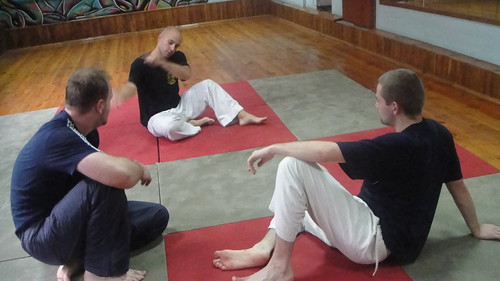 Anton has been really great. He has a black belt in TKD and teaches Krav Maga 6 days a week. He’s been doing BJJ for a year now. Because he has that instructor background it’s been like having private lessons every day 🙂 I hadn’t realized that for the last 3 months I’d been shrimping wrong. I’d been basically dragging my body across the mat instead of lifting my hip and pivoting on my shoulder (I don’t know that I’m describing that right). There were a lot of super basics even in warmups that I was missing pieces of, partly from having no background in physical…anything. He’s been great at filling in those pieces.

I had a chance to make it over to Kyiv to the Gracie Barra school there and meet Anna, the gal who introduced me to Anton! 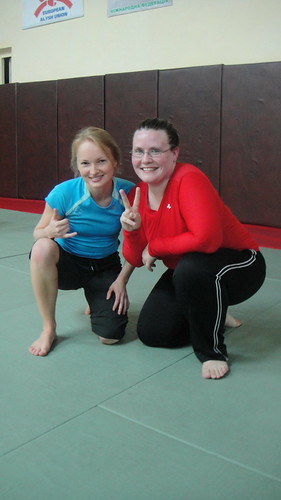 I didn’t grapple with her, but I did with her boyfriend! You can see that I am absolutely FIERCE when I roll. 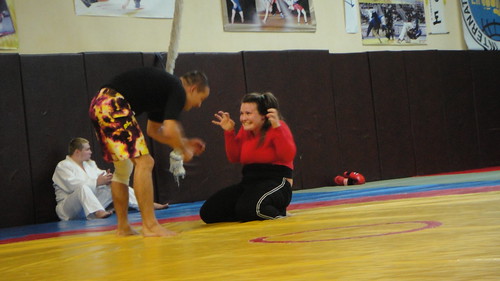 You can also see how TOTALLY SERIOUS I am when I roll.

I also had a chance to meet Lena, a Sambo champion! She teaches sambo 4 times every week for only $6.50 per month. Nope, you did not read that wrong. It is 50 uah per month and you can go 4 times per week. That stuns me. I believe that I was told that the Ukrainian government subsidizes sambo, which makes the price tag understandable. I went to her class and had such a fun time. I learned two take down throws (though not terribly well ack!) and she gave me some personal one-on-one time for some of the warm up moves. The cool thing: she told Anton she saw potential in me and that I could be really good if I gave her 6 months 🙂

Me and Lena, sambo extraordinaire! 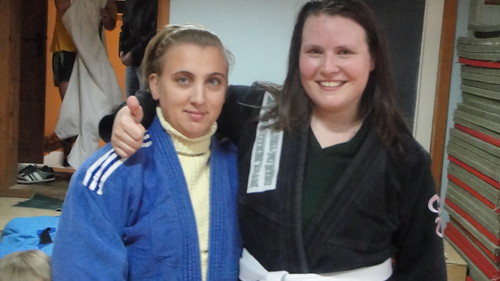 I head back to Korea on Sunday 🙁 and while I’m excited to get back to my gym, I will definitely miss Anton and all the awesome workouts I’ve been getting here. Were I to stay I know he’d whip me into shape. It’d be like having a personal trainer 🙂

Oh, and the last: updated my tattoo. Why yes, that is a VFD tattoo! Also, yes, I realize it makes my foot look like a weird animal 🙂 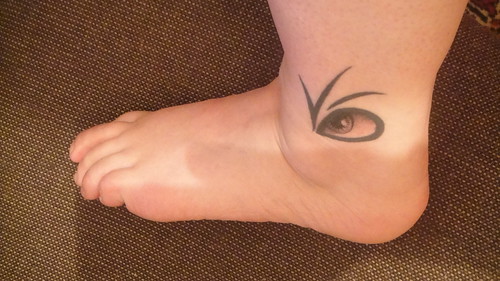 So, my holiday: worked out. I’m sore, bruised, and couldn’t be happier.