I don’t expect to get a purple before I die, as I am already rather old! So I have given up any ideas of stripes, belts or anything else and just set modest pathetic goals like not gassing out before 4 minutes are up, or passing the guard of the biggest guy in class just once before the end of the year, or not yelping next time something gets banged hard, hyperextended or sprained, and stuff like that.

Over on Jiu Jitsu Forums (my favorite BJJ place on the internet), there was a topic a while back (and yes, I waded through 26 pages of topics to find it) that asked: Can anyone achieve blackbelt status? They framed it by asking is it just time – if you put in your 10+ years can you make it, or is there a natural ability involved?

I wonder what you guys think, only I’m asking it a bit more personally.

My real question is: if you knew BJJ was a zero sum game for you, would you still play? Meaning – if you never progress. Let’s keep it to belts because that’s something concrete and easy to imagine. So, if you knew you would stay the belt you were for the rest of your time in BJJ, would you still be involved in BJJ? Or even if you realized you would be the next belt – say you’re a white belt, and you were able to make it to blue but never past it – for me that would be purple.

Would I be happy being in the permanent blue/purple club?

I think on some level there would be a sense of frustration. I think you can’t get away from that. I think that there IS something to being able to progress in a measurable way and have it recognized publicly – belt progression is a way to symbolize that.  Seeing everyone around you progress and after 10 years still staying the same belt could be demotivating.

Yet, on the other hand, I do cross stitching – something I absolutely love – and I have no magical belt to show my progress. I have been doing it for 20 years and am good at it, definitely, but even if I weren’t getting better I would absolutely do it out of sheer joy. 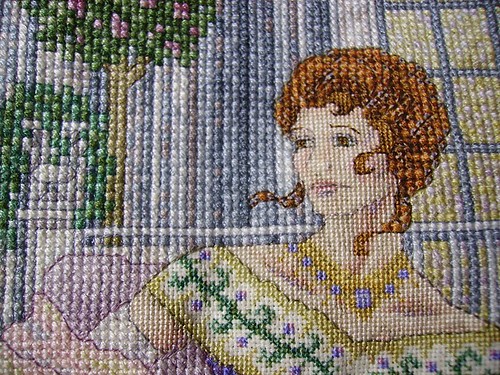 Here's a link to the whole finished piece

I think the other thing to remember: at black belt, there IS no belt progression (well TECHNICALLY, but that’s just about TIME, not ability). So at black belt you are technically playing a zero sum game with your belt.

I think that with everything I know about myself, I would play a zero sum game. I love BJJ. I love the comrodery, I love the physicality of it, I love the mental aspect, I love talking about it, I love learning about it. I think if it came down to it, if I knew 100% that I would never achieve the next belt level that I would still continue doing it. Partly because I know that the physical and social rewards would outweigh the meaning of the belt.

The same question is posed for you: if you knew 100% that you would never make it beyond your belt (or the one after) would you still show up? Would you still put in the mat time? If you still sucked after 10 years (and let’s face it – blue belts still suck in the whole scheme of things) would you still find the motivation to keep coming and keep sucking?

Sorry, man - your black belt lies on the other side of this boulder and there's no going around it

It’s  a very serious question and I think not one to be taken super lightly and quickly answered “of course!”, because not everyone DOES make it to black belt, and if that REALLY is your goal and that goal is taken away, why are you doing BJJ?

Choices: BJJ instructor for a friend

Nice job with the thoughtful answers over at the choices thread, where you chose between a black belt in BJJ who didn’t speak your language, or a lower belt who did. Now imagine a good friend of yours. This friend has decided they want to do BJJ. They know zero about it, have never watched […]

I recently made a new friend, and one of his favorite games is “Choices” – wherein you give someone a choice and they have to make up their minds, then you have the opportunity to try to change their mind. Of course the choices are always sucky. My friend has learned that my kryptonite is […]

I got this message from a reader: I’ve just created an account on http://www.fitocracy.com , but am finding it rather hard to get used to. I’ve been using http://www.konkura.com for the last 6 months, but heard Fitocracy is a step up. Can anyone tell me the benefits it has over a site like konkura.com? Does […]