There are so many posts for white belts about what not to do in class, advice on how to approach class,  and even pages with several links about classroom do’s and don’ts; however, there’s not quite so much advice about white belt etiquette online.  After an amusing thread over on jiujitsuforums.com, I wanted to give advice to white belts about how to act online so that I’m not just saying don’t be annoying, or as Wil Wheaton would say: 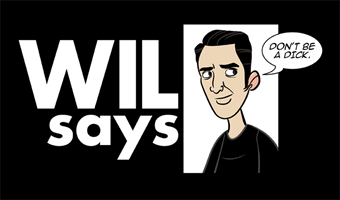 1. Don’t post about who you tapped out at your gym
A new white belt finally taps out someone and they post about it on the Internet, writing a thread entitled “Tapped out 3 guys at my gym.” It is met with negativity and the white belt is bewildered. Why?

The above makes it sound like “Omg I won at BJJ!” like tapping is the Most Important Thing. At the gym it shouldn’t be about winning or losing – it’s about learning. If you tap you learn. Besides, you have no idea how hard or light the person at your gym was actually going against you, especially if they’re upper belts. Post about tapping someone out in a competition. In competition, they’re giving their all.

Now, it’s different if you are posting about the entire evening and you post about each rolling session and include it as extra information, but when you go on a forum and your title is “Finally tapped out a blue belt” it feels douchey. Leading me to point two:

2. Don’t post that you (almost) tapped out your instructor
I guarantee your instructor was going at maybe 10% with you. You were not a challenge for them. It’s the equivalent of a chessmaster playing with a child. Unless you’re the Josh Waitzkin (who inspired the movie Searching for Bobby Fischer) of white belts, you didn’t almost do crap. They let you have it. Recognize that and don’t be “proud” of it and boast about it on the Internet.

Side note: Josh Waitzkin is a BLACK belt in BJJ studying under Marcelo Garcia
[youtube=http://www.youtube.com/watch?v=GrMQQ1IVLTc]

3. Don’t ask if it’s possible to get your X belt in a super short amount of time
This makes you sound like a belt chaser – someone who doesn’t really care about getting better, only about getting belts. It’s usually followed by a sad comment by the white-belt who just was over excited and wants to be the best X belt there is, but was “just wondering.” That’s why I’m cautioning you about it. This is what it sounds like: “Is it possible to get a blue belt in 1 month? What if I train every day for 8 hours a day???? What if I take steroids??? What if I stop sleeeeeping? BJJ IS MY LIFE!!!!!!”

I recognize that it is valid and reasonable to ask normal progression times, but when it is asked a CERTAIN WAY it tends to receive these types of responses. Asking people “How long does it normally take to get to X belt” does not usually incur negative feedback.

4. Don’t bitch that you’re not getting better
BJJ is HARD. It takes TIME. There is a reason that it takes 10+ years for most people to get their black belt. Sadly, I’ve seen white belts complain that they’re not seeing progress, even though they started a whole week ago. >_< It is annoying and unrealistic. Don’t cry about not getting better after 3 or 4 classes, or even 15 classes.

5. Don’t bitch that you haven’t gotten your blue belt yet
When you go on and on about how awesome you are and how you’re so much better than so-and-so who just got promoted to blue belt, it makes you sound bitter. It’s very possible that attitude might play a part in belt promotions, and if you act like this in person, it’s no wonder you didn’t get promoted. And similarly:

7. Don’t badmouth your former school/instructor online
It’s one thing to have a bad experience and write about it in an objective way, but unfortunately there are too many people who badmouth old schools. It’s like badmouthing an ex online and naming names – uncouth and leaves a bad taste in everyone’s mouth.

8. Don’t use the phrase: “watering down the art”
This is usually used in conjunction with a) questioning someone else’s rank b) badmouthing a former instructor. Example: “Hi, I’m random white belt. I was wondering – is it normal for someone to get their blue belt in 6 months? I think my old instructor is handing out belts really fast. I love BJJ and am concerned about the watering down of the art.”

The last one was maybe a just-me thing, but all the others hold true. BJJ is really exciting – and it’s so exciting that you’ll likely want to talk about it all the time, post about it online, and even start a blog about it! I started my blog as a newbie white belt, and some of the guiding principles I used may help you:

1. White belts are no experts in BJJ
I’m well versed in my field: training English teachers. Things I could comment on with expertise: teaching methodology, classroom management, and student-teacher interaction. There may be some overlap in your expertise, and feel free to comment on that, but watch out for sounding like an expert white belt.

2. Try not to complain
Talk about your limitations, just don’t whine about them. I have always tried to be realistic about my body and its capabilities. For example, when I started, I weighed 205 lbs. I was a large girl in class. Sometimes I would talk about how something felt embarrassing, or that I just couldn’t do something, or even that I cried in class. I tried not to complain, but rather to present myself as a human being with ups and downs.

My hope is that if you are a white belt reading this, you will take these suggestions to heart. Hopefully it will save you some potentially uncomfortable or confrontational interactions online. So I now ask the question:

What advice would you give white belts about online behavior?