As I mentioned, I’m a brand-newbie white belt. Got it on June 1, 2010. I usually work weekends, which is when tournaments are. But one came up quickly, and as luck would have it, I was free that weekend. So I decided to sign up for the tournament here, on July 18. 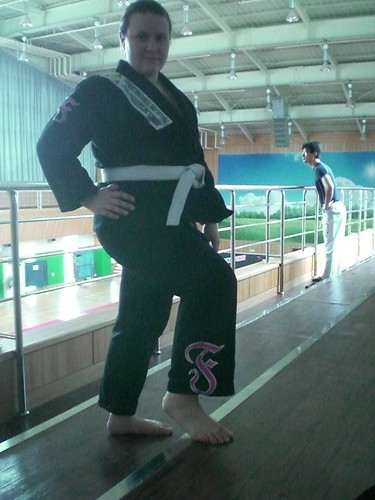 Me in my Fenom black gi at the tournament!

So to support women in BJJ I decided to go to this tournament and represent :). The only way for more women to go is for the women in it to actually go. Putting my money where my mouth is, I signed up. Right around $30, and I was warned up front that I may not have anyone to spar. I decided to go anyway. GRRLPOWER and all that.

I was excited and nervous, and more emotions than I thought. When I got to the tournament it turned out there were a total of 3 women there. Including me. At the time, what I felt was not pride, but embarrassment. I was the heaviest girl there, and the only woman in my weight category, so when my instructor had me stand on the podium to get my gold medal, it felt like “Here’s a gold medal for being the fat chick.” It felt absolutely humiliating to go through the pomp and circumstance of standing there, alone, with a gold medal around my neck for attendance.

That was the start of the strong emotions.

Then my instructor said the tournament would allow me to compete against a student. I am 33 years old, and they put me against an 18 year old student. We were up almost immediately and it was done in less than 30 seconds, no exaggeration. He pulled me into his guard, then quickly got me into an armbar. A really aggressive armbar. A really painful armbar. By really painful I mean: I cried out (more a yelp than a scream), then laid on the mat, cradling my arm, and started crying. I couldn’t stop crying because it hurt so much.

My instructor and the tourney guys sprayed some icy hot stuff on it, then wrapped it tight and gave me some general advice for it. I was still in tears. They stood me up on the podium in the second place spot and gave me a silver medal for being #2 in a 2 person category.

Did I mention that at the time I felt completely humiliated? Did I mention that the tears didn’t stop for at least a full half hour, then when I got home I had an even bigger sobfest? Oh, no? Okay then never mind me mentioning it. 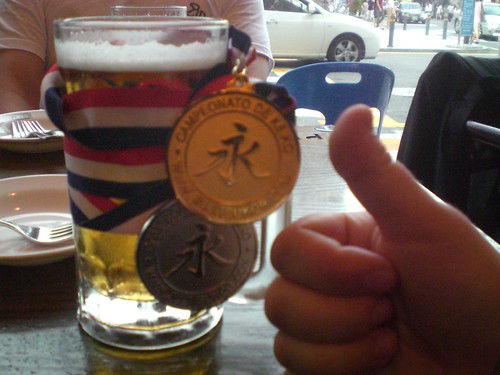 I felt ashamed and humiliated, and at the time felt like I won a gold medal for being a fat chick, and a silver medal for a dude cranking my arm so hard that I cried in front of EVERYONE. At the time.

Since the tournament I’ve been recovering. Yep, haven’t been back to BJJ since, but not for lack of want. The armbar injury hurt so bad that I couldn’t move my arm the next day, nor the day after. Just over a week later I FINALLY have full mobility, but still pain when it’s fully extended or bent. I hope that it will be better by tomorrow, but I’m certain it will be better by Friday.

Since the tournament I’ve also had a lot of reflection time. And time to be bitter. And then time to hear what people were telling me. And time to process, and here’s what I’ve come up with:

I earned those medals, damn it! No other women showed up! That reflects more on them than on me. Also, I will never again at a tournament roll with an 18 year-old boy who is a white belt because he will be full of testosterone, adrenaline, not enough body awareness, and too concerned about potentially losing to a woman. Bad combination. It equals aggressive armbars. Thinking back, I’m sure he felt a little bad about it (I hope so!).

Some people have asked what I learned from my experience (besides the “don’t roll with 18 year old male white belts at tournaments”) and I would say: I learned I am armbar phobic, so my goal is now to protect my elbows. Really.

Guys, guys! I discovered that I have a super power! It was totally unexpected. I was just messing around, not really paying attention, and BAM it appeared. A white belt made a comment about me doing something strategic. It was completely assumed a) I had a reason for what I was doing b) I was […]