Oh man I just returned from paradise. I spent 9 days in Malaysia visiting SL – aka Cupcake Armbar. It was absolutely the best vacation I’ve been on.

Here’s the fabulous SL herself, in front of the fantastic Chinese New Year feast she cooked: 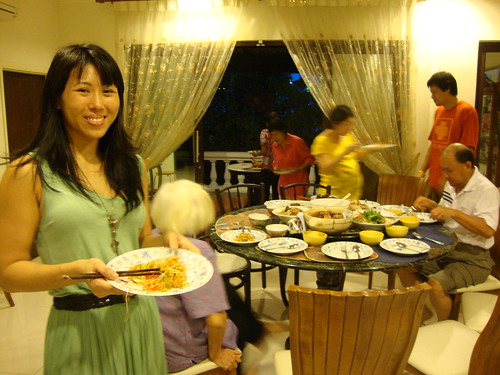 Here’s the view from her family’s house, where I stayed: 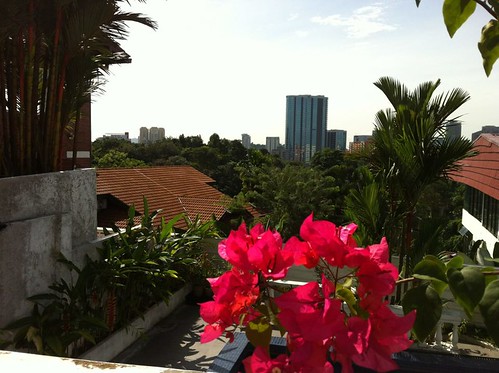 I did some interesting things, including painting batik: 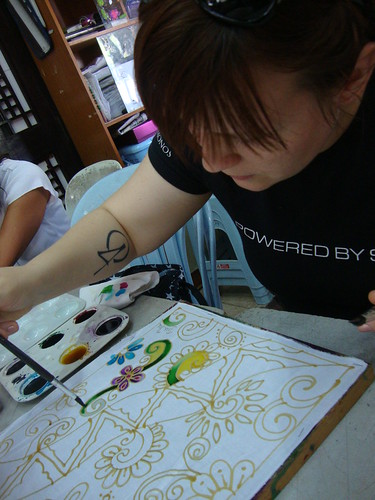 My first time painting batik, a national craft of Malaysia.

Going to the School of Hard Knocks: 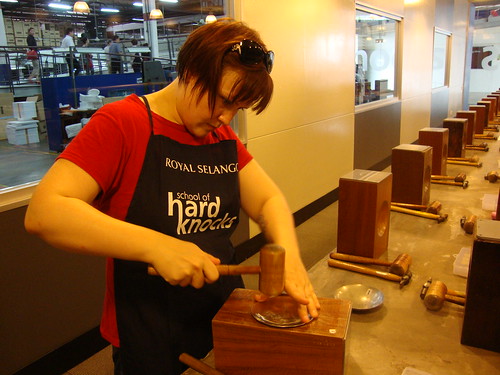 Knocking out a pewter bowl.

I also had the opportunity to go to a “Magical” Ray Elbe seminar (which I briefly refer to here). Even though I couldn’t participate I had such an excellent time watching. Ray was a very personable guy with a huge personality and the mouth to match ;). I am writing a seminar review, which should go up soon. 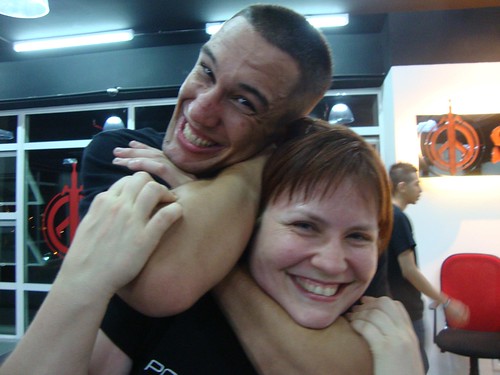 Definitely a crack up.

I got to visit the Batu Caves, which is where a totally over the top Hindu festival takes place every year (nope, didn’t see the festival – it was the following week): 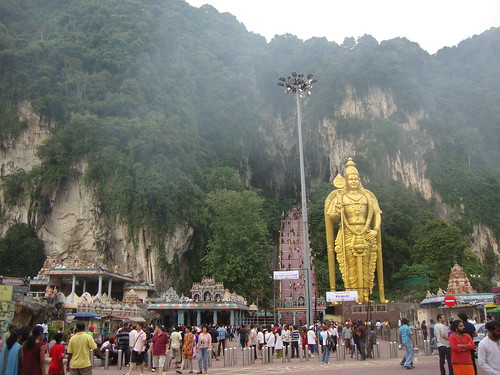 Did I mention there are millions of stairs? Okay, only 272. SL was not pleased: 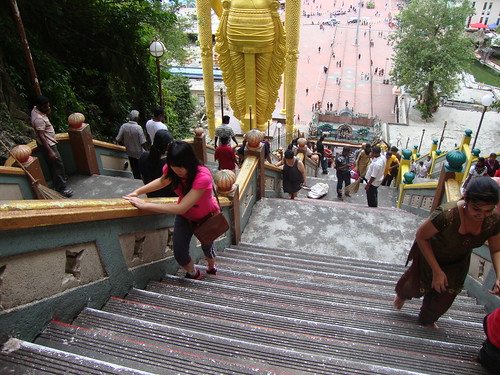 I ate a TON of food and gained literally about 10 lbs. 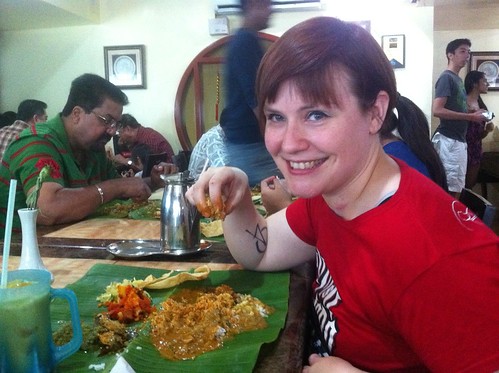 Playing with my food

I tried the infamous DURIAN fruit! 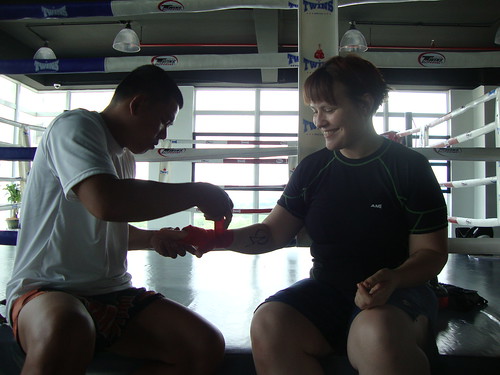 Getting my hands wrapped. PUNCHING! Something not in BJJ.

— which totally kicked my ass. 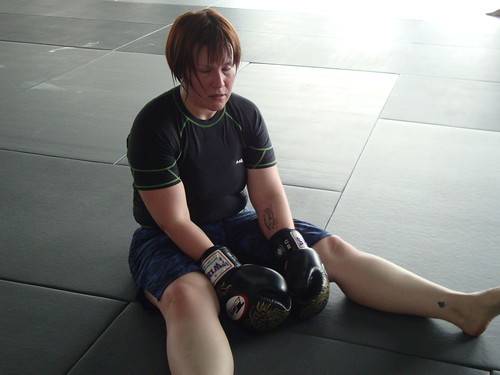 Yeah - I was completely done.

Unfortunately, usually either SL or I were behind the camera, so we have precious few photos of us together.

Out to eat - basically ANY day during that vacation 🙂

So I wanted to share some things I learned during my stay in Malaysia.

10 things I learned about Malaysia:
1. Where it is 🙂 Yeah – I was really ignorant. I had no idea it bordered both Thailand AND Indonesia, OR that it is split in half.
2. It is super westernized. I heard SO MUCH ENGLISH while I was there. SL and her family/friends all speak English together, there were so many more western amenities available at supermarkets. Amazing.
3. There are 3 predominant cultures/religions there. Malay, which reminded me of Hawaiian people; Indian, and Chinese. Malay people are Muslim and there were a crap ton of Muslims in Malaysia. Everywhere I looked I saw women wearing head scarves – and most completely covered their hair. There were also many many Hindus, Christians, and Buddhists.
4. They says “la” a lot. At the end of a sentence they add “la” like – “okay-la” or “I know-la.” hehe
5. Malaysia is where that really big, scary Hindu festival takes place. You know, the one where they stick hooks in their bodies or whip themselves – and it’s always featured on the Discovery channel? Yeah – that one: Thaipusam.
6. The first Survivor was filmed there. I had no idea Borneo was in Malaysia, let alone Survivor. 😛
7. They drive on the left-hand side of the street. Hadn’t known that.
8. Getting around sucks. They don’t have good public transportation.
9. Thievery is everywhere! They even have signs about it! (see below)
10. Heat rashes suck. Yeah, I thought I had a terrible allergic reaction to something, or thought that I had a sunburn – nope, an awful heat rash. Skin felt dry and like I’d rolled in one of those cactuses with extremely fine, hair-like prickles. Touching my back caused sharp pains, just like I had been jabbed with a cactus, and I had red bumps all over me 🙁
11. I want to retire there! Seriously – paradise, despite rashes and purse thievery. 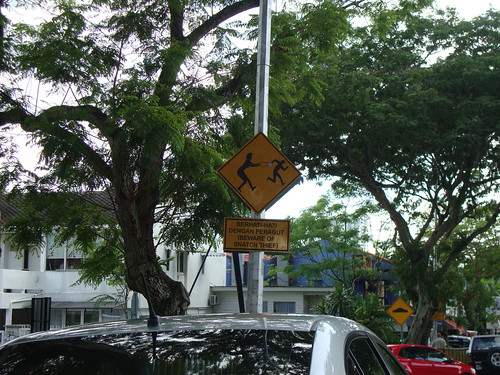 10 things I learned about SL
1. She REALLY loves pink. No, really. I mean LOVES pink. From her pink ankle guards, to her pink car, and even this awesome pink shirt: 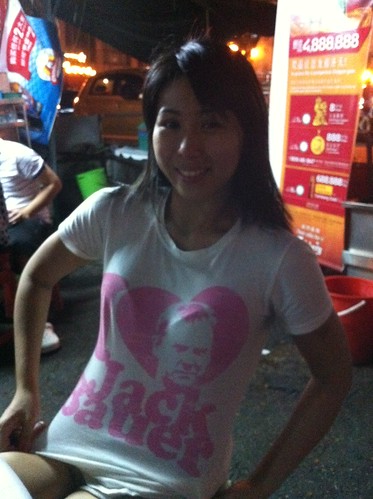 She wore this for 24 hours. Just kidding.

2. She drives like an Asian female. Her words not mine. hehehe. She drove crazily enough that we were able to get from point A to point B like a maniac! Thankfully no accidents, though!
3. Her boyfriend is super awesome. He’s kind and wonderful and supportive. Plus, how awesome to have a BJJ boyfriend?
4. Her accent completely changes all the time. She has times where her accent is so clear, while other times I couldn’t tell if she was speaking English. heh. Mostly when she was speaking to me it was clear unless she was really tired.
5. She is afraid of heights. Yet, she went up to the top of Batu Caves LIKE A BOSS! 🙂
6. She is a FREAKING AMAZING COOK!!! I asked if we could get Kung-pao chicken and she whipped it right up!! Plus, her banoffee pie? SL – marry me! 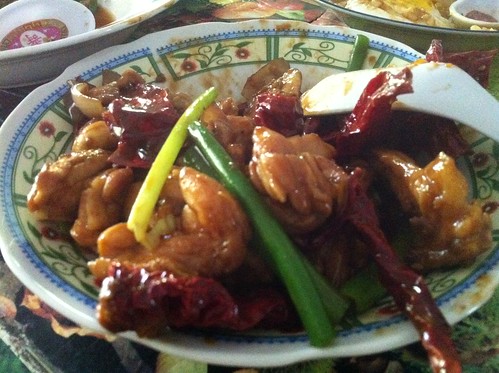 Deeeeelicious! No wonder I gained 10 lbs!

7. She is totally addicted to video games. While I was there she finished Arkham City and started playing Red Dead Redemption: Undead Nightmare. Thankfully this coincided nicely with my Internet addiction, and most nights were spent in my bedroom, with her playing games and me tinkering on the Interwebs.
8. She has a super bubbly personality. SL is so positive and kind. It really does match her blog. She’s a ton of fun to be around and not even once did I wish I had more alone time.
9. She’s accident prone. Okay, maybe more like an accident magnet. While there I saw someone else sprain her ankle AND give her a microtear in her butt muscle/groin thanks to a banana split. Yeowch!
10. Her name is misleading. I saw neither cupcakes NOR armbars while I was there. I’ve officially redubbed her Kung-pao Injury. ^_^

5 things I learned about BJJ in Malaysia (as of January 2012)
1. There are only 9 women who do BJJ in Malaysia
2. BJJ is still new – there are no Malaysian originated black belts
3. Most people in Malaysia are blue/white belts
4. SL’s coach, Marcos Escobar, is the only black belt teaching BJJ in Malaysia.
5. Classes are taught in English at SL’s school.

So there you have it – a breakdown of my visit to Malaysia to visit SL. This never would have happened without Jiu Jitsu. Thank you, Jiu Jitsu! And a huge thank you to SL for taking a week off work and hanging out with me and cooking for me and being awesome!

If you were able to visit ONE BJJ blogger on your next vacation, who would you choose? I think my next choice would be Jonna, aka PinkJiuJitsu, partly because she has super awesome cats, she seems very friendly, she lives in a country I’ve never been, and it’s relatively cheap to get to the Philippines from Korea.

You can visit SL’s tumbler here, and you can see my Malaysian photo set here (though as of 2/1/12 I’ve not finished uploading–I’ll update you guys when it’s completely finished).

BJJ: Give us an update!

Hey folks! It’s so common to read and not comment, and it TOTALLY doesn’t help that I haven’t posted a lot of discussion friendly topics lately, so let’s chat! New Readers? Introduce yourself! Tell where/how often you train, how did you find us? What do you like about jiu jitsu? Let us welcome you with […]