Feminism is not a dirty word

My logo to represent Women in Brazilian Jiu Jitsu

I’m not a super political person. For the most part I’d rather watch an episode of Star Trek or play a board game than debate politics. I tend to avoid them, much to my father’s dismay, as I have yet to engage in a single conversation with him about politics or history–his favorite subjects.

One subject I do get very passionate about, though, is feminism and violence against women.

As you are aware, I’ve been designing gis like crazy for Meerkat & Parttimegrappler‘s  DESIGN-YOUR-OWN-CRAZY-ASS-BJJ GI challenge! So far I’m up to 19. Nope, not obsessed at all!

Mostly they’ve been really nerdy, but then I started thinking of making a female empowerment gi, which of course led to Rosie the Riveter, then to researching some feminist symbols, which led me to Say NO – UNiTE,  a very powerful website.  “Based on country data available, up to 70 per cent of women experience physical or sexual violence from men in their lifetime.” Additionally, 1 in 3 women and girls worldwide may be abused in their lifetimes.

I created a gi to help raise awareness of violence against women. Brazilian Jiu Jitsu is one way for women to help protect themselves. The numbers are to call attention to those startling statistics. The logo with the handprint was changed from blue to red to create an even more powerful visual representation. I put the handprint behind the flap of the gi so it is only partly showing because it is an issue that hides in plain site. The JiuJitsoka logo was created to be a strong representation of women in jiu jitsu. It is a logo I plan to use more, and I would be happy to share with anyone who would like. 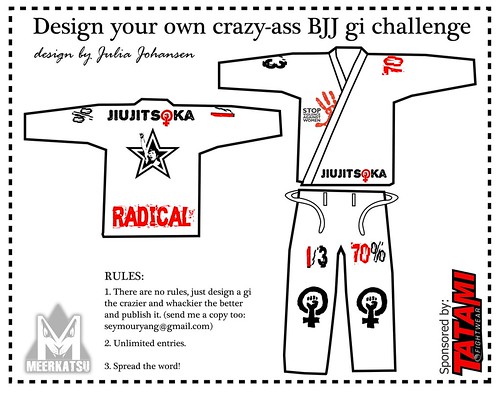 My own personal creation. I’m very proud of this.

The gi also has a number of strong feminist icons/ideas. RADICAL to indicate radical feminism as well as me being a radical woman by simply being in a very male dominated sport.  And the symbol for women with the added fist to show empowerment.

I created a profile on Say No-UNiTE called Women in Brazilian Jiu Jitsu. I uploaded my JiuJitsoka logo there, and when my profile is approved I am going to upload this gi onto there. I’ve decided this gi will be a reality, regardless of whether it wins the contest or not. This issue is too important, and me being a woman wearing this gi will be a very powerful statement.

I encourage all of you to create a profile there and look for actions near you. Looks like I’ll be starting my own here, as they have no existing chapters here in Korea. Once my profile has been approved I’ll let you know, and please consider joining with me in my effort to raise awareness of this important issue.

Political talk over. Papa would be so proud.

BJJ Gear: My Gis and Their Fit

I currently own 9 gis. It’s taken quite a lot for me to figure out which sizes fit, how I like them to fit, and which are my favorites. The different companies fit quite differently, so I thought I would share my impressions of each of the gis I own. The inspiration: Georgette posted a […]