Because I’m a happy new BLUE BELT! 4 days shy of my one year BJJ anniversary. 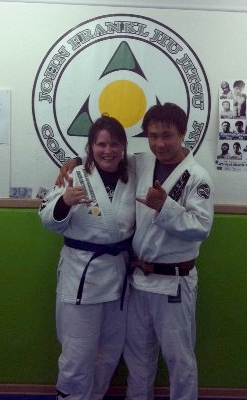 Me, my instructor & my NEW BLUE BELT! Higher resolution photo to replace this

It was a surprise to me! There were so many people at our gym that night because my friend Roy is leaving. (Goodbye, Roy!!!) Roy was the guy I played “Strip BJJ” with several months ago. 🙂 My instructor had us circle up and he walked around with tape and gave several people stripes. Then he walked into the back and came out with a blue belt and asked one of my teammates to take off his blue belt and give it to the instructor. I was curious as to who was getting promoted. He called out one of my teammates’ names and my name! Shocking!

He untied my belt and tied my teammate’s belt around my waist. So yeah–I joked that I went from a 4 stripe white to a 4 stripe blue. But really it was just a plain blue belt 🙂 He told me he will get me my very own blue belt on Monday. Woot! Surprise promotion is a surprise! Then he gave a fairly long speech in Korean. The short translation was: we’d been working very hard and the journey is just starting. 🙂 I am thrilled–I’m the first woman my instructor has promoted to blue, and I’m the only female blue belt at my academy. I worked hard for this and I am so proud of myself for what I have accomplished.

Sadly, When I posted the picture of me with my instructor, one “friend” wrote: “wow i want to be his student i might get my purple tomorrow then at that rate he promotes people. anyway congratulations.” Thanks so much for your wet blanketness of douchiness. UNFRIENDED! Only internet strangers get the freebie douchebag card, not my “friends.” 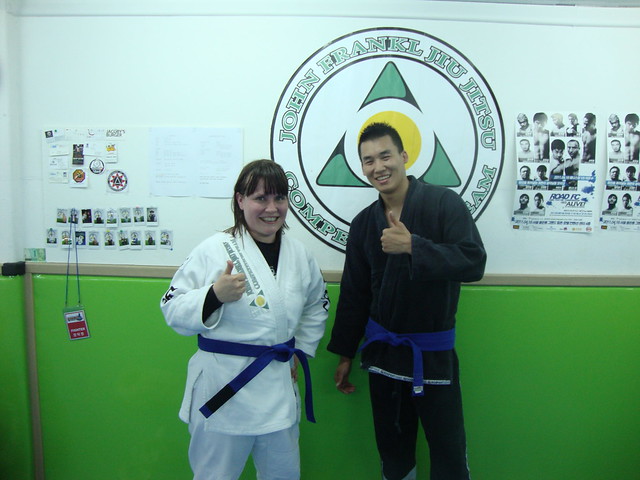 Me and my teammate, both brand new blue belts!

And yes, Slidey, we had our GAUNTLET! And yes, I made a VIDEO FOR YOU! 🙂

[youtube=http://www.youtube.com/watch?v=utDIXUwclnY]
Melodramatic for YOUR pleasure!

Interesting timing: I had recently read Georgette’s post about promotions, as well as her post about her friend’s position that men’s and women’s BJJ is not on the same level. Of course it made me look up Slidey’s position on belts in general.

To be clear, I am EXCITED for ANYONE (including myself!!!) who gets a new belt. I am EXCITED for ALL PROMOTIONS. I LOVE the feeling of public recognition and of being able to congratulate someone who has stayed in this game long enough to BE promoted. That said, I feel that ultimately, belts are there to keep your gi closed. There is a danger when you rely too much on what color someone’s belt is. Under or overestimating someone’s skill, feeling like you SHOULD be able to do XY or Z against random person, or even developing too much of a hierarchy and belt worship. I’ve decided that in “Jiu-Jiu Jiu-Jitsu” you can be any non-standard belt because they don’t matter.

For your photo-chop pleasure: In Jiu-Jiu Jiu-Jitsu, an "orange" belt is just a little different. I'd be a daisy belt.

This concept is similar in a mixed-level language class. We’re all there to learn from one another, regardless of language level! I equate a black belt with someone who is an advanced speaker of a language. Just as someone who reaches advanced levels in German is not “finished” learning German, neither is the black belt ever finished learning jiu jitsu.

Sorry, but a black belt doesn't mean you're done!

Additionally, different schools have different standards for belt testing. You have Roy Dean who created “the standard”, called “Blue Belt Requirements.” Gracie University requires 36 moves (log in to see them–registration is free). Draculino has an iPhone app with his 51 blue belt requirements. His include:

I love the autonomy that BJJ affords its instructors. Some schools promote when they feel the person is ready. Some schools have stripes, some don’t. There simply is no standard. Georgette’s article discusses the good and back points of lack of standardization. But it doesn’t stop there. One of my Brazilian readers, Abrandao, wrote this comment to me:

For me the belt doesn’t represent skill, but will power, perseverance, and dedication.

That makes a lot of sense to me. With a colored belt comes some respect. A blue belt publicly acknowledges SOMETHING. Whether it is SKILL or DEDICATION, it is investing in that student and says “I believe in you.” Because blue is just the first step, even if is symbolic rather than skill based, there is still TIME to get your game up to speed.

That lack of standardization and consistency is precisely why I say belts don’t matter. A blue belt at school A is NOT the same at school B. This is true for English programs as well–“Intermediate” at one school is not the same at another. Just as I don’t care what someone’s TOEIC score is before I have a conversation, I don’t care what color someone’s belt is–I just want to roll! What I like about nogi is that you CAN’T tell just by looking at someone what their level is. 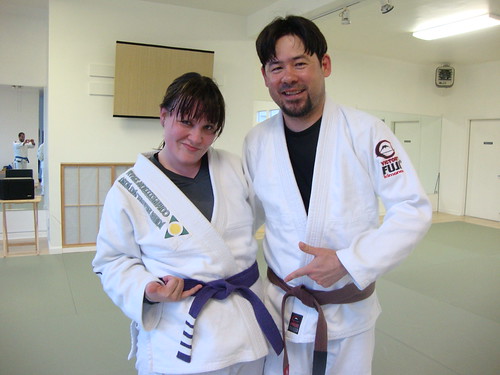 Me with a fake purple belt. It's my YEAH I'M A DOUCH-BAG PURPLE face.

Funny story–while in California I forgot my white belt one day. My friend DR loaned me his purple belt. I wore it for about 2 hours–there were only 5 of us there. I made a joke about purple belts having magical powers and some guy online wrote “I’d never feel proud wear a belt I didn’t earn.” My feeling=LIGHTEN UP! It’s a piece of cloth, not Dumbo’s magic feather! Plus, I’m practicing my aggressive purple belt face in that picture. I just look badass! No? Okay…I’ll stick to blue for now.

I leave you with a few questions:

1. How does your school do promotions?
2. What are your thoughts on standardizing belt testing?
3. Which belt would you be in Jiu-Jiu Jiu-Jitsu?
4. What are some of your favorite BLUE things? 😀

Blueberry-cheesecake ice cream and blue belts top my list! I also offer you a VENN diagram of awesome blue-ness:

I'm missing a ton of stuff, but here are some highlights