So Meerkatsu issued a challenge: design your own crazy-ass gi. I rose to the challenge and came up with four designs so far. I wonder what you think of them!

First is my Wonder Woman gi! I used to dress up as Wonder Woman at conventions, so this one was a no brainer! 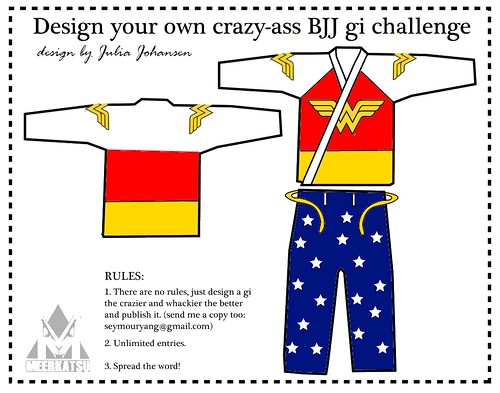 Next I decided to go artsy and thought the swirls in Starry Night would look AMAZING on a gi. Not super realistic, but really cool in theory. 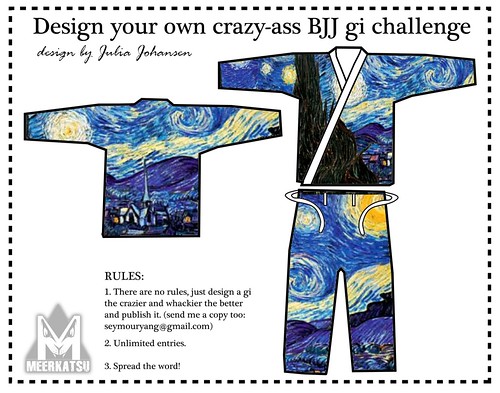 I’m a huge Marvel fan, and the bright colors of the original X-Men uniform appealed to me. The back part took the most time. I wanted the X across the mid-section, but couldn’t think how to really make it work. 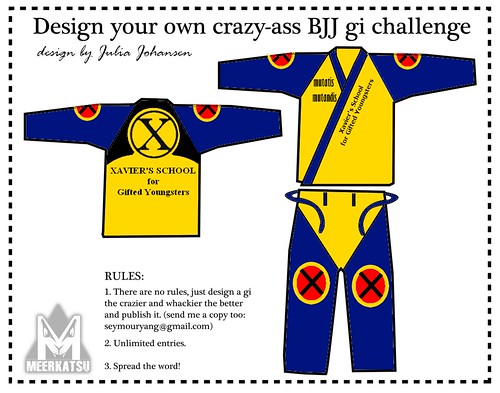 And finally, my pièce de résistance. I imagined this within the first month of doing BJJ. My idea was that I would reward myself with this gi after sticking with BJJ for a full year.

See, I’m a huge nerd. I have 3 Star Trek tattoos, and one of them is a Klingon tattoo. For this gi, I imagined it in black with red and gold embroidery. I wanted my name in Klingon, I wanted some Klingon writing on it, the Klingon emblem, and some Klingon weapons. I found some patches online and used some of the artwork from some Klingon interest groups and modified them or added them to this piece. I am extremely proud of how it turned out.

For the mock up I had to find and download a working Klingon font–all are not created equally. There are at least two out there, one the “original” and one that is usable. Then I had to research what I wanted it to say, find the words/phrases, and translate them into the symbols, as most Klingon websites don’t have the Klingon font and instead transliterate. Whew. It was hard work, but I really hope to make this a reality.

The words on the back say “Victory, Success, Honor”. The word over the right breast says my name Julia. The diagonal words say “Klingons do not surrender.” Without further ado, my Klingon Brazilian Jiu Jitsu gi: 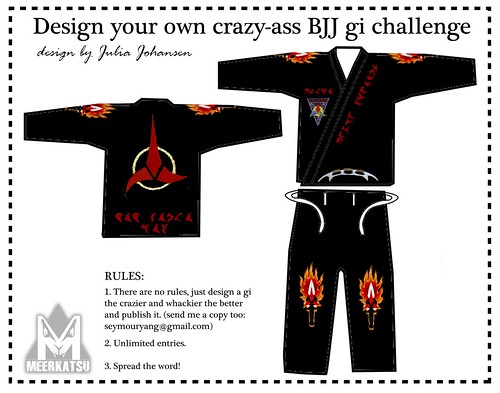 Take the challenge and make your own! Go to Seymour’s blog immediately!

BJJ Gear: My Gis and Their Fit

I currently own 9 gis. It’s taken quite a lot for me to figure out which sizes fit, how I like them to fit, and which are my favorites. The different companies fit quite differently, so I thought I would share my impressions of each of the gis I own. The inspiration: Georgette posted a […]