Describe yourself on the mats

Today there was a visitor to our school. My instructor introduced him in Korean, but being that I don’t speak Korean I had no idea what was going on. After the translation I said to the guy “Hey, nice to meet you!” My instructor remarked that I was very outgoing. Actually, what happened was that he described me in Korean and then the word was bandied about in English as those who spoke both languages tried to translate. “Gregarious?” “Excited?” They settled on “Outgoing.” 🙂 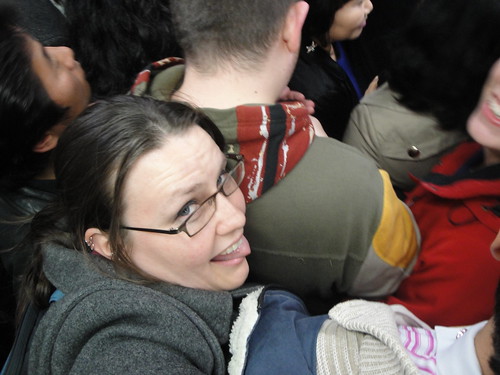 See, even in a crowded subway I’m outgoing!

Back in this post I wrote I may not be good at something, but if I love it I will stick to it and stay enthusiastic. I truly feel like what I lack in talent/skill, I more than make up for in heart, enthusiasm, and determination.

Today was no different. After drilling and rolling I found that I was tired, but I was so jazzed. I was literally hopping up and down, couldn’t wait to roll again. This kept up and kept up, and finally after class I ended up doing pushups and some ab exercises to work off the excess energy. Every time I was getting smooshed, choked, squashed, rolled over, submitted, and I bounced back with a “let’s do it again!” attitude.

So I wanted to bring this around to an exercise I love doing with my students. It’s called a 6-Word Story. Ernest Hemingway wrote a six word story once: Baby boots for sale, never worn. From there, English teachers have taken off with it. I personally love applying it to movies and having students summarize a movie in six words. For example:
1.  Unsinkable boat hits iceberg, Jack dies.
2. Red S, flies around, saves people.
3. James Cameron’s blue aliens in 3-d!

Let’s bring this back to jiu jitsu. Describe yourself on the mats in exactly six words. The, and, of and even individual letters all count as a word.

When I started BJJ: This is embarrassing but really fun.
My BJJ summary now: Low on skill, full of passion.

What is YOUR BJJ summary? Feel free to post ones from within your BJJ journey!